One Night in London 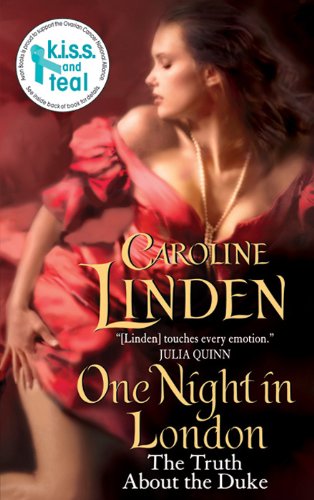 This eBook is courtesy of NetGalley and Harper Collins/Avon.

This is the first in “The Truth About A Duke” trilogy.This is the trilogy of three brothers,”Edward the logical, responsible brother; Gerard the independent man of action; and Charlie the enigma”, who find out on their father’s death bed,he had a major secret that could destroy their inheritance and their lives.

A bargain that was all business . . . and pure passion.

Neither wealth nor beauty will help Lady Francesca Gordon win custody of her young niece Georgina, saving the girl from a cruel stepmother; she needs London’s top solicitor for that. But when Edward de Lacey, son of the powerful Duke of Durham, hires away the one man who can do the job, Francesca decides Edward himself must champion her case . . . if only she can melt the dashing lord’s stony heart.

Edward has reason to be guarded, though. London’s tabloids have just exposed a secret that could ruin his entire family. When Francesca offers a unique chance to undo the damage, Edward is forced to agree to a partnership . . . and now, each moment together feeds the flames of his scandalous longing for the passionate widow. But when Georgina disappears, fate will test them both . . . and leave their love hanging in the balance.

This is the first book by Caroline Linden I have read, but it won't be my last! I loved it! The writing drew me in and kept me turning pages until the very end. I really warmed to the characters. Francesca was daring and sassy, but she also brought out Edward's sensual and warm side that had been hiding since the very beginning. They were a great pair that I very much enjoyed getting to know as the story went on. Edward was a different person when he was around Francesca, their personalities complemented each other very well. I will be looking forward to the next book in this series because this one definitely leaves you wondering!!