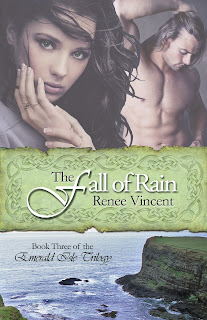 Blurb:
Leif Dæganssen, an archeologist from Norway, is determined to trace back his Scandinavian roots as far as the Dark Ages and find proof of their existence on the Emerald Isle. After several years of living off the west coast of Ireland, he finally uncovers an ancient artifact—an intricately decorated chest with pagan carvings—buried beneath the very porch of his coastal cottage. Knowing it only confirms the presence of a glorified Norse-influenced settlement on Inis Mór, he’s determined to establish a link between himself and those who once inhabited the rugged isle.
For as long as she can remember, Lorraine O’Connor has had dreams of a Norse warrior kissing her. And even though she’s never fully understood the reason for her vivid subconscious imagination, she welcomes the meaningless and wanton pleasure of being in a Viking’s protective embrace—until the day she meets that brazen Northman on an impulsive vacation trip to Ireland.
Though blindsided by the relevance of her dreams and the strange familiarity of the man within them, Lorraine can’t help but feel a deep-seated intimacy toward Leif. And the more she gets to know him, the more she’s convinced they’ve shared a life together in a time long forgotten.
Are the clues to their ancestral past hidden within the contents of the chest or buried deep within their hearts?

“Are you kidding?” she asked, her eyes nervously diverting from his the moment they met. “This is the best pan-seared fish I’ve ever had.”
He shook his head, forking his first bite. “Now I’m convinced you have a concussion.”
“I’m serious. I’ve never had fish like this before. Most times it’s fried to a crisp or bland as hell.”
“Well, I don’t know much about Kentucky, but I believe they’re known for their horses, not herbs.” He took another generous bite and waited. “That wasn’t funny?”
She mildly smiled and stuffed a piece of bread in her mouth. “You make a better cook than a comedian.”
“Ah, look at that. Give the small town Kentucky girl a hot shower and some food and she’s as good as new.”
Another smile. That one he was sure to catch.
“I don’t know about all that,” she replied uncertainly.
“Well, you’re gaining a bit of confidence. It’s good to know you’re less fearful of me.”
Her hand froze, her fork stuck in another cut of fish. “I don’t fear you, Leif. I just don’t know you.”
He set his utensil down and crossed his arms, eager to finally delve into a meaningful discussion. “What is it you’d like to know?”
I shied from his intrusive eyes, feeling the heat of his stare setting me ablaze.
He leaned in. “I know you are avoiding me because you feel ‘tis right. ‘Tis moral. ‘Tis safer. But you needn’t fear me.”
I took a deep breath. “I fear you not, Dægan. I simply know not enough about you.”
His face recoiled slightly as if my choice of words had stunned him. He released me and crossed his arms in front of him. “What would you like to know?”
“Rain?”
Leif’s voice caught her off guard and she looked around, confused, the name Dægan echoing in her ears. She blinked, staring at the man across from her, his face illustrating as much bewilderment as her own.
“You all right?” he asked, reaching for her hand.
Instantly, she pulled away, trying to gather her wits. It seemed she’d hear Leif’s words in the same minute she’d hear the exact same thing from a man by the name of Dægan.
What the hell was wrong with her? Why did she keep seeing things that weren’t really there or hear conversations from an unknown past, which were so akin to what she was talking about now?
“You blacked out for a moment,” he explained.
“I did?” The question came out of her mouth even though she knew she had gone somewhere else, somewhere that seemed like memories. It was as if she were having personal recollections of long ago, which involved her and a Norse warrior in some uncanny fashion.
“Yeah, you did. I asked you what you wanted to know about me, and suddenly, your eyes glazed over. You stared straight forward, but focused on nothing. Are you sure you’re all right? Perhaps we need to wake up the good doc.”
She fidgeted in her chair. The thought of a doctor looking her over and determining she was categorically crazy was not in her vacation plans. She tried to go back to her normal routine of eating, forking another bite of fish to prove to him, if not herself, he was overreacting. “Really, I’m fine. You shouldn’t worry. I just need to finish eating and get some rest. I’ve had a long day.”
Again, he didn’t look convinced. But what else could she say? She was as lost as he was when it came to her “blacking out” and no amount of pondering it could procure a logical explanation.
For the rest of the meal, they both lost their tongues for small talk and the only sound heard was the casual clinking of silverware on their plates. It was just as well, since neither seemed to know what to say anyway. Despite the great food and warm hospitality Leif had provided her, Lorraine wanted nothing more than to be alone. To lie down with her thoughts and hopefully be exhausted enough to sleep.
She prayed for sleep. Sleep without dreams. Somehow, as she glanced over at Leif looking at her in the most concerned way, she didn’t think she’d get her wish.

About The Author:
I am an author with a passionate interest in Irish and Norse history. I live in the rolling hills of Kentucky with my husband and two children on a beautiful secluded farm of horses and hay fields.
When I am not writing, I love to spend my time on the back of a horse, whether with my family or with my friends. There is nothing like feeling the sunlight on your face, the wind in your hair, and the power of the animal beneath you as you enjoy the beautiful scenery. Seeing the world from a saddle is, by far, the best view and the best therapy for a heavy heart or a troubled mind. My therapist's name, or my horse's, rather, is "Statues Suddenly Lucky", a full-blooded Tennessee Walker, and of course, he goes by the name of Lucky for short.
I am a sucker for a good cup of coffee (lots of cream and sugar...and whipped cream if I can get my hands on it), great conversation, and a lilting Irish accent. I love to read and I can't resist watching great epic historical movies.

“This book and author earn my highest recommendations and I feel privileged to have read one of the best. It is a must read for any lover of historical romance or even lovers of romance in general.”
~ 5 Stars TOP PICK ~ Night Owl Reviews

“…this story is realistic, historically accurate and unforgettable; a story you will remember long after the last page is read.”
~ 5 Blue Ribbons! ~ Romance Junkies

“Every word of this story has meaning. Every moment leads to the next. Every word is simultaneously natural and brilliant, each one holding an unmistakable place in history with the telling of this tale.”
~ Author Sarah Ballance

“It comes alive and winds its way into your heart. This is a must-read for anyone who enjoys historical romance and I cannot wait to read the final book of the trilogy as this story has stayed with me days after I read the last word.”
~ 5 Hearts ~ The Romance Studio

“I will admit to being skeptical that this story would capture me as much as the first had, but I was blown away by the awesomeness that is Mac Liam. Ms. Vincent surpassed all of my expectations with her impressive writing abilities, while offering more incites and revelations that will keep readers coming back for more.”
~ 5 Stars TOP PICK ~ Night Owl Reviews

Silent Partner
"Ms. Vincent’s writing has the unique ability of capturing both the reader’s heart and mind… I thoroughly enjoyed everything about this story and would love to see it become a movie. Another highly recommended read by Renee Vincent!"
~ "5 Star TOP PICK" ~ Night Owl Reviews

Her writing sparkles, and given this is the author’s first attempt at contemporary mainstream romance, she creates the right impact for settings, pace and conflict. Her balance of the self-absorbed hero meeting emotionally challenged heroine is stunning because of her research into the heroine’s background. This book is a keeper."
~ "LASR BEST BOOK" ~ Long And Short Reviews
Posted by DeborahR at 6:00 AM