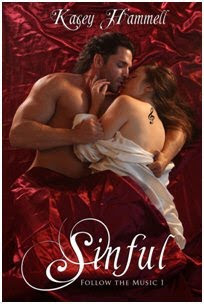 BLURB:
Music was their only dream & passion...
Until they found one another...

For years, Mikayla Gallan has dreamed of providing a better life for her younger brother, Matthew, and herself. Coming from a family of musicians, Mikayla and Matthew have dreams of someday making it big. But Mikayla's first priority is always ensuring Matthew's future. When Houdini Records comes knocking on her door, offering her everything she's ever wanted, Mikayla's scared to grab onto their offer.

Sinclair "Sin" Devlin, part-owner of Houdini Records has loved and lost and has no intentions of ever going down that path again. He's determined to put his company back on the map and is willing to do whatever it takes to make it happen. Meeting Mikayla Gallan, hearing her sultry and passionate voice on stage, Sin believes he has found the only woman that could save the company. He's even more shocked to realize that perhaps she's also the only woman to save him from himself.


EXCERPT:
Sinclair heard the voice before he saw her. Her voice in itself was smooth, raspy and packed a hell of a punch to the gut. The vision before him—he wouldn’t have expected to have that voice. Des was correct, long flowing hair, and damn, she was hot. He couldn’t see her eyes, but he hoped to get a bit closer soon to have a peek. About five-three in height, she was a itty bitty thing, but her voice—he had to admit—Des had found him a woman who had more potential than the hundreds they had seen over the last few months.
Her voice called to him. He could close his eyes, hear it and think of hot summer nights. The oohs and aahs in her lyrics brought his visions of satin sheets and hot bodies to life with sound. He could picture lovers walking hand-in-hand and satin sheets with sweaty, writhing bodies making love.
The more she sang, the deeper his senses went on full alert. She was drawing him in, which of course was a good thing for any singer to capture his or her audience, but his libido was coming to life. She was seducing him.
He was finding it hard to settle his naughty thoughts and direct them to the task-at-hand.
He turned to look at Des, leaned closer so he could hear him over the music. “She’s good, I’ll give her that. What do you know about her?”
Des stood tall and proud, obviously very pleased for his find. “Emilio felt she had something, too, and a demo of her landed on my desk. There was a note, unsigned, with After Hours address and the nights she worked. I was in awe of her talent and wanted to see her in action before wasting your time, though I was confident from what I heard on the demo. She’s thirty, single, no kids, works here at night. Haven’t found out her day job as yet, if she even has one. I was here a couple nights ago, when you had that meeting with the banker…?”
Sinclair nodded, eyes riveted to the stage. He was listening to Des but his eyes were drawn back to her.
“Anyway, the one waitress, Christine, told me a bit about her. But when I started asking more and more questions, like her day job, where she lived, she stopped talking and wouldn’t answer anything else.”
“Well, those kinds of questions, she probably thought you were a crazed stalker after her friend,” Sinclair reprimanded.
“Yeah well. I had to have answers. You can hear her. She’s perfect, Sin! You know it, that intense look on your face is very telling.”
Sighing, Sinclair looked at his friend. “She can put on a good show and has power chords, but who’s to say she can do live shows, night after night?” Sinclair needed to remind Des that just because someone could carry a tune, hold a few notes didn’t mean that in front of large audiences and stadiums, in videos or on tour, that they could keep up and hold their own. Des might be a great business partner who had handled things for them solo over the last few years, but he often times let his emotions get the better of his common sense.
“Dammit, man. I wish you would take stuff like this from me seriously sometimes! She’s our girl. She’s exactly what we’ve been looking for. You’d be a fool to be stubborn on this!”
“Okay, okay, I am listening. What else do you know?”
“Her name is Mikayla Gallan. That, and what I already told you, is about all I do know.” Des looked toward the stage as she held the last note for what seemed like an eternity.
Sinclair looked around the nightclub. Not one man in the room was paying any attention to their dates. Even the bartender and male waiters had stopped to stare.
“Thank you ladies and gentleman. I’m pleased to see so many familiar faces tonight. Sit back and enjoy,” came the voice from onstage.
Even her speaking voice had a breathless quality to it that sent shivers down Sinclair’s spine. That voice, it was what he wanted. The rest of the package was more than he could ever have hoped to find attached to a voice like that.
Sinclair looked at Des. They stood looking at one another for at least thirty seconds. Sinclair had to admit that though Des sometimes let his emotions lead, there was no man he trusted more with his career and life.
“See if you can get us backstage at some point tonight to meet this Mikayla Gallan. Let’s at least introduce ourselves,” Sinclair said, silently admitting defeat and giving in to his pal.
“Yes!” Des said, slapping Sinclair on the shoulder. “You will not regret this, Sin. I promise.” Des headed off to speak with the bartender.
Sinclair looked back to the stage as the crooning angel began the next song.
Unbeknownst to you, Mikayla Gallan, you are the only hope I have to stay in this business. I need you...more than you could possibly know. 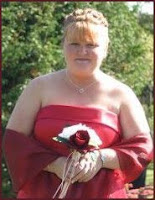 Canadian-born author, Kacey Hammell is a self-proclaimed book-a-holic, who began reading romances at a young age and became easily addicted. As a Mom of three, Kacey has made certain that each of her children know the value of the written word and the adventures they could escape on by becoming book-a-holics in their own right.
A decade ago, while working for multiple review sites, Kacey quickly discovered that she was developing the writing bug. Thanks to the encouragement of her own beloved hero husband, she decided to try her hand at writing.
With a love of contemporary settings, modern day romances and the happily ever after, as well as the excitement of suspense, Kacey creates stories in genres she’s familiar with and that she loves most. She also loves vampires who nibble the necks of the heroines, ghosts who can't leave a loved one, shape-shifters who are sexier than hell and the thought of her very own werewolf or were-cat to tame makes her tremble!
Readers can contact Kacey at kaceyhammell@gmail.com
Readers can learn more about Kacey’s books and contact her via …
Facebook
Twitter
Website/Blog
Email
Posted by DeborahR at 5:00 AM