Spotlight on: Bodyguard of Lies 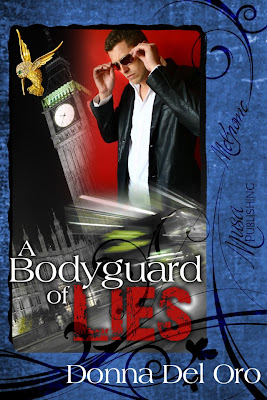 A BODYGUARD OF LIES
has a dual setting, a contemporary one and a WWII/London setting. It's a blend of romance, mystery and WWII espionage. I researched it while in England, Ireland and Germany in 2009. The story involves a Jewish-American FBI analyst, who's recruited by MI-5 to go undercover and investigate a naturalized American grandmother. The elderly woman is suspected by MI-5 of being a notorious Nazi spy never caught by the Allies during the war, who caused the deaths of thousands and is wanted for war crimes. Jake Bernstein runs into a series of unexpected obstacles and complications: This spy knows a secret that could endanger the royal family; the old woman has a beautiful granddaughter who threatens to derail his investigation; a neo-Nazi group in Ireland known as the Celtic Wolves; and a clever, cagey old woman who's not as weak as she looks.


Excerpt:
The major handed Jake a secure mobile phone, which he tucked into his jacket’s inside pocket.  Acknowledging the older man’s military background and bearing, Jake gave a quick half-salute, biting back the sarcastic retort that sprang to mind. I’m thirty-two, Major, not thirteen.
“Will do, Major,” he said and grabbed the handle of his suitcase. “Where the hell is this motor coach going, anyway? Besides the Republic of Ireland?” Major Temple’s bushy gray eyebrows arched. “No, didn’t have a chance to read the itinerary. Too busy with the files.”
Temple chomped on his pipe, one side of his mouth upturned in another wry smile. Jake sensed the man was holding something back.
“Southwest England, Wales, Republic of Ireland, a bit of Scotland. Two weeks’ worth.”
“And if I conclude this investigation in less time?”
“Then we debrief and back home you go. We’ll handle the filing of charges and arrest warrants if needed. Extradition, if necessary, for Mrs. Snider.  Well then, good luck, ol’ man.”
Jake nodded and took his leave. Outside, he hailed the guide, a friendly, outgoing sort who introduced himself as Robert Morse. The man quickly turned the suitcase over to the driver, who stowed it in the storage bin at the side of the motor coach. As soon as Robert checked him in and indicated that he could take on board his carryon, Jake moved to the coach’s front door. He suddenly stepped aside as a young, very pretty blonde climbed down, spun around and helped an elderly woman descend.
“Sorry, Robert, my grandmother has to visit the restroom.”
The blonde glanced over at Jake, grinned in greeting, then took her grandmother’s arm and followed the direction of Robert’s sweeping arm. The two women entered the glass-fronted hotel lobby and walked slowly around the corner of the lobby’s counter. Jake’s gaze clung to them.
So there they were. Mary McCoy Snider and her granddaughter, Meghan Larsen. What a hottie!
“Quite a looker, that one,” Robert murmured them, his eyes following their progress as well.

An understatement, Jake thought as he nodded to the man in agreement. The granddaughter was lovely—had the face and figure of a Hollywood starlet. She had a wholesome but sexy look about her. The red lipstick she wore accentuated her full, sensual mouth; her deep-set blue eyes were large and luminous. A boxy navy-blue pea jacket concealed some of her curves, but the overall effect of a beautiful, symmetrical face, a tanned complexion, long blonde waves partly covered with a large, black beret, and graceful motion was powerful. Like a slap of warm sunshine in this cold, damp country. Seduc—er, schmoozing that girl was going to be a perk, not a chore.
Already, he was warming to this assignment.
The grandmother, bulky in a long wooly coat, looked attractive despite her purported eighty-five years of age. The elderly woman was well preserved, he decided, and must have been quite a beauty in her youth. Like her granddaughter, she would’ve turned men’s heads and carried her power over them like a Hollywood pinup girl.
“Would you care to board, Mr. Schoenberger?”offered Robert, the tour guide, interrupting his reverie.
“Call me Jake.  I’ll wait until the women return.”
The tour guide tossed him a knowing smirk.
A few minutes later, Jake was helping the elderly woman up to the steep first step. Mary McCoy Snider paused on the steps, holding onto the railing on the coach’s door, and looked back at Jake, her dark blue eyes sharp with intelligence.
“Thank you, young man. What’s your name?” she asked, a slight Texas drawl softening her naturally strong, clear voice.
“Jake. Jake Schoenberger from Virginia.” He smiled up at the elderly grandmother, who then nodded and moved up into the coach. He slid his gaze down to the granddaughter, who’d paused at the coach’s door. The top of her head came to his jawline.
“Thanks for helping, Jake,” she said, blinking up at him before climbing the steps herself. Her long honey-blonde hair brushed his shoulder when she moved past him. There was a self-conscious shyness in her manner. Which Jake found odd, for such a beautiful woman. Wow. His pulse revved up.
Dude, you’re on duty.
Wasn’t that why they chose him? Get close, peel off the layers of distrust...
He proceeded up after Meghan Larsen, appreciating the rear view. Too bad, he thought, when the two women took seats near the front of the packed coach. The one vacant double-seat was in the rear of the coach. He nodded a friendly greeting to all of the passengers as he passed them on his way to the back. They were mostly couples but another single man, an older guy in his fifties, sat alone at the halfway point in the coach. Two women of about the man’s same age—maybe mid-forties—were behind him. They perked up as he walked by, shot him wide smiles beaming with anticipation.
He knew that look.
After stowing his carry-on underneath the empty seat next to him, Jake sat down. His long legs brushed against the seat in front. Damn, like traveling in coach. Two weeks in this freakin’ bus—how was he going to stand it?
He leaned over. From his vantage point, he could see the blonde’s wavy locks falling about her shoulders. She was sitting on the opposite side of the coach in the aisle seat, her grandmother in the window seat. Damn, he’d have to find a way of sitting closer to them. Maybe their seats on the coach weren’t fixed ...or he could feign motion sickness and ask Robert to place him further forward.
As he was plotting a way to chat up Mary Snider and her granddaughter, the blonde swiveled her upper body and looked down the aisle. Their eyes locked together briefly and she smiled. Despite a night without sleep and heavy with jet lag, his pulse kicked up. Something lurched in his chest. His groin clenched. Jake returned the smile.
Good, he thought, she noticed me. Contact with targets made.

Donna Del Oro spent her childhood in two places, Silicon Valley, CA and the countryside of East Texas, as her father tried several job opportunities. Finally settling in Silicon Valley, she grew up in a bilingual, bicultural world--Spanish on her mother's side and English on her father's. Comfortable in both worlds, she decided upon retiring from teaching to write about her Hispanic side. Four women's fiction books resulted and a series about professional singers, their careers and love lives. Retired and devoting much of her abundant free time to exercise, writing, singing and her grandson, Donna has finally reached a point in life that totally satisfies her. Life is good and she has no complaints, just a lot of gratitude for her many blessings.
Website