Sunrise on the Battery by Beth Webb Hart

Now that she's arrived at her ultimate address, will Mary Lynn's longed-for view of the harbor satisfy the craving of her heart?

At last, Mary Lynn and Jackson Scoville are living the life they've dreamed of. Two self-described "small town bumpkins" from Round O, South Carolina, they made a small fortune selling the little gems of lowcountry real estate Jackson inherited and now they are living in the heart of Charleston, South Carolina, carefully working their way up the social ladder in hopes of meeting their ultimate goal:  to give their three daughters the life they themselves never had.
But the long-forgotten God of Mary Lynn's childhood seems to be trying to get her attention in clear and unusual ways.   So clear and strange she can no longer deny it.  When Mary Lynn prays for Jackson to open his mind and heart to God, her prayers are answered beyond her wildest imaginings.  Now Jackson's dramatic conversion (which includes street witnessing, giving away a lot of money, and inviting poor, desperate and marginalized people into their home) is threatening their social status as well as their family mission statement.  Is she willing to go along with him?
What would it be like to go "all out" for God?  Jackson, a sharp and focused Type A man, is unafraid and willing to go all the way.  Mary Lynn has her doubts.

First off let me say I loved this book. Ms. Hart has a way of writing that makes each character easy to relate to. Even when their actions are not always what you think they should be and their desires are opposite to each other I found myself pulling for them. Ms. Hart gives you a view of what radical faith would look like today and how a society based on social status and appearance would respond to it, while also asking readers to consider where faith fits into their life. It's an absorbing story of a family whose desire to fit in almost costs them everything they value most.
The story will have you inspecting your motivations for what you do and what you want in life. What do you pray for and what happens when your prayers are answered in ways you are not expecting?
The story was developed nicely and the imagery is strong. The characters are complex and believable. Their emotions and actions are authentic. The relationships and dialogue were genuine. Sunrise on the Battery is a novel with strong characters and a well-written plot. This is a great read about a realistic family. I would highly recommend it! 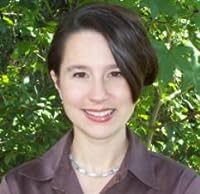 ABOUT THE AUTHOR:
Beth Webb Hart, a South Carolina native, holds a B.A. in English Literature from Hollins College and an M.F.A. in Creative Writing from Sarah Lawrence College. Her first novel, Grace at Low Tide, was one of three finalists for the 2006 Christy Awards in the general/contemporary/fiction category. Her second novel, Adelaide Piper, was selected for Books-a-Million's book club and for their national book of the month for December, 2006. Both titles were included in the "Top 10 Christian Novels of 2006" by Booklist, the American Library Association's review journal. Hart's third novel, The Wedding Machine, became an ECPA best-seller in July of 2008.
Beth Webb lectures on a variety of topics and has taught creative writing on the college and high school level where she received two national awards from Scholastic, Inc. She lives with her husband, composer Edward Hart, and their children in Charleston, South Carolina where she teaches English and Creative Writing at Ashley Hall.

Disclosure of Material Connection: I received this book free from the publisher through the BookSneeze®.com <http://BookSneeze®.com> book review bloggers program. I was not required to write a positive review. The opinions I have expressed are my own. I am disclosing this in accordance with the Federal Trade Commission’s 16 CFR, Part 255 <http://www.access.gpo.gov/nara/cfr/waisidx_03/16cfr255_03.html> : “Guides Concerning the Use of Endorsements and Testimonials in Advertising.”