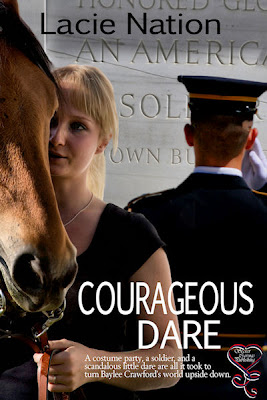 Please join us in welcoming Lacie Nation to Love to Read Romance! We are excited to have her here!
Please share a short bio with us:
I’ve been writing for many years, but just decided a couple years ago to try and get published. I write from a very personal place. When I write something emotional I’m normally a wreck the rest of the day. I hear a lot of people talking about how they work on multiple books at once, I can’t do that because I delve so deep into the characters when writing them that if I were to work on more than one project at a time, I wouldn’t be able to devote everything I have to the characters. That’s just me though.

Can you tell us more about Courageous Dare?
This is a story that I loved writing. Many of us have done something crazy, but I don’t know if anyone has ever been as crazy as Baylee Crawford when she accepted a dare to have sex with a stranger. Only he didn’t stay a stranger because they fell in love. When Baylee has to say goodbye to Nash when he goes back to war it nearly crushes her. Her world comes crashing down when her and her family receive a folded flag telling them a loved one has been killed in action.

Where did the idea come from?
I was cooking dinner one night and the idea just popped in my head. When I sat down to write it, the words just flowed.

What sort of research did you do for this book?
I did a lot of research on how a fallen soldier is returned to his family. I wanted to make sure that part of the story was done perfectly because way too many families have had to deal with this. Our troops deserve respect and I wanted this story to be nothing but respectful.

Do you have a common theme or item that appears in each of your books?
I try to write books that deal with overcoming an issue of some sort. With Courageous Dare, it was healing after a tragedy.

Who has inspired you as an author?
Life has inspired me. Everything I’ve been through in my life has made me a better person. Even the bad things in my life and without those things I wouldn’t be able to write the things I write.

Do you have any “must haves” with you while you’re writing?
Popcorn, cappuccino, and quiet. If the BF is home then writing is impossible because I swear the man has a ‘Lacie’s writing’ radar. I will write a sentence and he starts talking. lol

How do you remember ideas that come to you at odd times?
I write them down as soon as they come to me.

What are some of your favorite books? Who are you reading now?
I haven’t really had much time to read lately, but I do love me some J.R. Ward.

What's next for you?
I’m working on a piece called The Weeping Willow Tree.

Where can you be found online?
http://lacienation.weebly.com/
links, and everything else needed can be found on my website.

Do you have anything you'd like to ask our readers?
What draws you into a story? Do like whirlwind romances or a relationship that builds?

Baylee Crawford thought she had her whole life figured out, right up until she accepts a scandalous little dare involving a mysterious man that makes her throw caution to the wind. When she falls completely in love with her mystery man, how will she cope when she has to say goodbye to him as he leaves for war? When a tragedy threatens to tear her world apart, Baylee is left feeling lost and has no idea how to help her family in the midst of this loss. Follow Baylee and Nash through a tale of love, passion, longing, war, and tragedy.

Without fear or uncertainty in Baylee’s voice, she spoke in her way of challenging Jamie. “Dare.”
Jamie’s smile spread even wider, and she nodded slowly. She took a shot before saying, “I dare you to have sex with a stranger.”
A collective gasp swept around the room. Suddenly, this game had taken a turn from the occasional strip tease and random kiss to something else entirely. Baylee laughed and thought for a moment. She hadn’t been with a man in a very long time, not since her relationship ended a year ago. She never thought she’d sleep with some random man, but when her gaze fell upon the man sitting next to her, she made her decision.
She smiled at Jamie, stood up, and extended her hand to the delicious looking man sitting to her right. Shock passed over his face. He shook his head slightly, grabbed her hand, and followed her lead. Baylee looked over her shoulder to her best friend. She had to laugh a little at the look of total astonishment on Jamie’s face.
Baylee’s heart pounded harder in her chest the closer she got to her bedroom. Stopping at the door, she took a deep breath before turning the knob. Walking in, she took another deep breath and turned.
He leaned back against the door, causing it to latch with a soft click. Head down, the fedora covered his whole face, with the exception of his lips in a slightly dark, sexy smile. When Baylee heard the lock click, she clenched her thighs together in anticipation.
Taking a step toward her, he asked softly, “What should I call you?”
The deep timber of his voice sent chills down her spine and when she said “Baylee,” her voice sounded breathy. She never realized her voice could sound sultry.
“What should I call you?”
“Nash.”
His name, the only thing he said before he pressed his lips to hers gently. She didn’t think. Instead she deepened the kiss, tracing her tongue along his bottom lip. He opened his mouth sliding his tongue into hers. She moaned at his taste, whiskey, mint, and the slightest hint of cigarette smoke. A strange combination she found mouth watering.
“Tell me you’re sure about this. Tell me you want me.”
Desperation. The only word she could use to describe the way he sounded.
“Yes,” she gasped as he nipped the place where her shoulder met her neck.
Her answer seemed to be the only encouragement he needed. His hands moved down her body, stopping at the hem of her dress. When he pulled back to look at her once more, she gave him a nod of permission.
One sweep of his arms left her standing in nothing more than her panties, gloves, and heels. Swaying her hips in her best exotic dancer impression, she rolled her gloves off, letting them drop to the ground. She sauntered the three steps he had put between them when he removed her dress. She slowly lifted the hat off his head, revealing his deep auburn colored hair, cut really short on the sides and slightly longer on top.
Her hands ghosted down the back of his neck, over his shoulders, and across his chest to the buttons on his vest. As she worked the buttons, he put his hands on both sides of her face and kissed her so passionately, her knees nearly buckled. Once she got the vest off, she had no patients for the shirt buttons. She ripped them open with both of them groaning in delight at the sounds of buttons hitting the wall and hardwood floor. With their hands working together, his clothes quickly became a pile on the floor next to hers.
She moved to take her shoes off, but he stopped her, shaking his head slowly with a devious grin on his face. The way his eyes seemed to drink her in made her lightheaded.
“I want to taste you.”