Life in Death by Harlow Coban 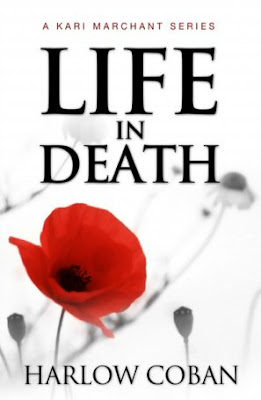 When a girl that social worker Kari Marchant places in foster care is brutally murdered, she’s compelled to learn why. Her quest for the truth pits her against friends and coworkers. As Kari works to solve the horrific plot, more people die.  How far should she go to learn the truth—even if it threatens her life?
When homicide detective Rance Nicolet meets Kari, his attraction to her is powerful—and the feeling is mutual. But things between them go terribly wrong when Kari’s old lover is found murdered with a letter from her in his pocket. The evidence against Kari is damning. Rance’s personal and professional lives collide. Does he blindly believe the woman he’s falling in love with or follow the evidence no matter where it leads?

BOOK TRAILER:
YouTube - http://youtu.be/wwG47m3TyxM
ABOUT THE AUTHOR:
Author Harlow Coban was born in Kansas City, MO, but grew up in Denver, CO. She relocated to North Carolina five years ago with her husband, two dogs, and 16-year old twins.

She shares a birthday with the notorious Napoleon Bonaparte. In keeping with his legacy, she is currently working on taking over the world. Harlow’s positive attitude and fresh take on life are her tools and conquest is certain.
She spends her free time writing, dancing, traveling and defending mailboxes from her 16-year-old twins’ driving.
Her debut novel, LIFE IN DEATH (February 2012), is a murder mystery which pulls from real-life situations from her own family history. She felt compelled to share her story with the world while offering a thrilling, entertaining, and amusing escape for readers.
In keeping with her commitment to improving the lives of children, a portion of the proceeds from the sale of her book will be donated to the Boys and Girls Club in her home state of North Carolina.


Be sure to visit the rest of the book tour!!  http://cblspromotions.blogspot.com/2012/03/vbt-life-in-death-kari-marchant-series.html