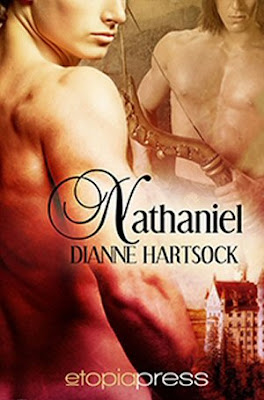 From the moment Taden rescues Nathaniel from the Sutherlin soldiers’ torture, he finds himself caught in the gaze of the most beautiful eyes he’s ever seen; amazing eyes that hold him thrilled and confused. The Sutherlins are planning to invade the beautiful Tahon Valley, but as Taden secrets Nathaniel from their reach, he finds himself drawn to the young man. Not only does he feel the urge to protect him, but he feels an ache he hasn’t felt in many long years.
Nathaniel claims to be a traveler from a distant continent, saying he comes in peace. True or not, the youth has powers beyond anything Taden has seen—control over men and animals and the very weather. Taden falls hard for the strange traveler, protecting him not only from the Sutherlins but from his own mistrustful people, who don’t understand Nathaniel’s powers and accuse him of being a witch…
EXCERPT:

Taden edged closer to the men in the clearing, careful not to snag his cloak on the fragrant scrub brush concealing him. The two Sutherlin soldiers had stripped their captive of his shirt, and his chest glistened with sweat in the firelight. His head hung heavily, arms stretched between two trees. A mop of golden curls hid his face. Taden’s knuckles whitened on the hunting knife in his hand as a soldier struck the prisoner in the face, making him cry out. Taden could see the dark bruising on his torso. This wasn’t the first time he had been beaten.
The second man slammed a balled fist into the prisoner’s abdomen and laughed at his grunt of pain. It was too much. Maybe he was being a fool for interfering, but he couldn’t stand by and watch the needless cruelty. He eased from hiding and silently closed the distance between him and the soldiers.
The closest man was raising his fist again when Taden reached him. He threw an arm around the soldier’s neck and jerked, exposing the vulnerable throat. The smell of sweat and fear filled his nostrils as he drew his blade in a quick motion across the knotty windpipe. Hot blood spilled over the back of his hand. The soldier wheezed and slumped heavily in his arms.
Taden threw the dead man from himself and started for the other, but his prey had no stomach for a fight and ran into the trees. Taden sprinted after him. He couldn’t allow the man to reach his companions. He caught the soldier within heartbeats with his longer stride and plunged the knife into the man’s back with both hands. Thrown off balance, they both went down hard on the forest floor. Taden scrambled to his knees and straddled the screaming soldier. He jerked the knife free and thrust it again into the blood soaked uniform. The keen blade severed bone and muscle, seeking the heart.
The soldier’s life pumped out around the knife handle and Taden swore bitterly, witness to the terror on the face pressed into the dirt. A boy playing at being a man. “Damn them,” he fumed. The Sutherlins had no scruples about whom they sent out to fight.
He tucked a blond curl of hair behind the boy’s ear as he muttered his soldier’s prayer, stirred to sadness for the one in the young man’s life who would never have the pleasure of that small intimacy again. Taden climbed to his feet, bone weary and heartsick, and tugged the hunting knife from the soldier’s back. A twig snapped as he wiped it clean in the dirt, making his heart pound, but it was only the scurry of a small animal in the brush. He took a last look at the dead soldier then made his way back through the moonlit forest towards the flickering fire and the young man bound to the trees.
The prisoner had his feet planted apart, knees locked to keep from sagging against the bindings, but blood slicked his wrists and ran down his forearms from where the ropes bit into the skin. His head was lowered, and Taden wondered if his strength had given out.
“Hello? Don’t be afraid,” he said carefully. “I come without enmity.”
The prisoner lifted his head, and Taden was caught in the gaze of the most beautiful eyes he’d ever seen, clear green with a starburst of gold at the pupils; amazing eyes that held him confused and thrilling. The look brushed against the lonely spot in his heart he kept deeply buried. Then the man blinked, and Taden felt released, as if he’d been spellbound. His heart lurched at the exhaustion in the oval face.
The captive dropped his head as he lost consciousness, and Taden slung an arm around his waist, supporting the dead weight. He groped for the hunting knife at his belt and cut the ropes, finding the prisoner a lesser burden than he’d feared as he carried him through the trees to the horse hidden in a nearby glen.
The stallion snorted at the scent of blood as he approached. Taden spoke softly to him, murmuring endearments and promises of apples as he draped the loose body over the saddle. He stroked the muscular neck and warm chest of his horse, talking quietly as he untied the reins from a low branch. The man roused at that moment, and Taden heard a moan, quickly stifled.
“Let me help you,” he said in the same gentle tones he’d used with the horse. The newcomer struggled awkwardly to a sitting position, holding tightly to Taden’s arm for balance. He panted against the horse’s neck, then looked down at Taden, his face shockingly white against the dark hide of the stallion.
Taden waited expectantly, but the prisoner’s heavy lids fluttered and Taden swung deftly up behind him, pulling the young man against his chest before he could fall. The man was shivering, and Taden pulled his cloak from his back and dropped it over the prisoner’s hunched shoulders. He nudged the horse into the forest, listening for the sound of pursuit, and frowned, grim at the thought. The men working his fields had claimed they’d spotted Sutherlins slipping into the forest. He now carried the proof of that with him.
IMHO:
This was a nice short story. I thought it was interesting that in the beginning of the story it was Taden rescuing Nathaniel and it seemed that Taden was the strong one. By the end of the book you realize they seem to have switched and Nathaniel is actually the more powerful. There was so much going on in the story that it would have made a very good full length novel.

ABOUT THE AUTHOR:
Dianne lives in the beautiful Willamette Valley of Oregon with her incredibly patient husband, who puts up with the endless hours she spends hunched over the keyboard letting her characters play.
She says Oregon’s raindrops are the perfect setting in which to write her tales. There’s something about being cooped up in the house while it pours rain outside and a fire crackles on the hearth inside that kindles her imagination.
Currently, Dianne works as a floral designer in a locally-owned gift shop. Which she says is the perfect job for her. When not writing, she can express herself through the rich colors and textures of flowers and foliage.


One lucky commenter will win a digital copy of NATHANIEL! Good Luck!