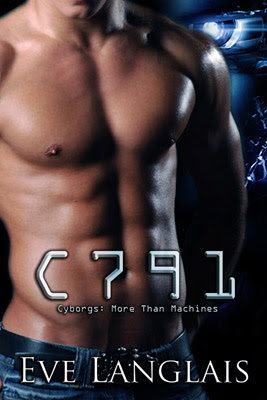 BLURB:
Machines aren’t supposed to feel, but this cyborg can’t help falling in love.
Assigned as a specimen collector for a captured cyborg, Chloe is intrigued by the machine disguised as a man. Kidnapped during his daring escape, he takes her on an erotic adventure and shows her that despite the chip in his brain, his humanity is not completely lost.
Formerly known as unit X109GI, Joe is on a quest to discover his origin. While he doesn’t find the answers he’s looking for, he does discover that affection and lust aren’t just for humans. But when it comes to a battle between logic and love, which side will the cybernetic organism--once a man--choose?
Evaluating his feelings will have to wait though, because the military isn’t done with Joe. When they threaten the one thing he wants above all else, he’ll discover something shocking that will rock the new cyborg nation—and fuel a desire for vengeance.

The sight of Chloe and Seth so at ease with each other, and worse, touching each other set something off inside Joe, a combination of irrational anger sprinkled with a covetousness he’d not experienced but had heard of. Jealousy.
Whatever the name for the emotion, he found himself unable to halt it as he ripped Seth away from Chloe’s side and sent his fist into the grinning face. He maintained enough control to not beat his friend to a pulp — barely — but he couldn’t stop himself from slinging Chloe over his shoulder and stomping off to their room.
“What the heck was that about?” she exclaimed as she dangled down his back.
“You seem to have forgotten who you belong to.”
She didn’t say anything for a moment. “Are you jealous?”
“No.” Yes!
“It’s normal to feel that way. It just never occurred to me you would.”
“I don’t. Jealousy is a human emotion. I am a cyborg. We are above such petty wastes of our time.”
“Really. Well then, someone should probably explain that to Seth’s face,” she drawled.
“This is not entertaining. You were practically inviting him to take ownership of your body.”
“I was not,” she exclaimed, and a small rational part of him knew she spoke truly, but he’d lost the ability to decipher logic from madness where she was concerned.
Arriving at their room, he tossed her onto the bed and quickly tore at his clothes.
“What are you doing?” she asked, her eyes wide, but not with trepidation if the protruding nipples through her shirt were any indication.
“Showing you who owns your body.”
“Me.”
“Wrong answer,” he growled. “I do. And it seems I must show you.”
He fell on her, and despite her previous defiant answer, she welcomed him with open arms and a fierce kiss. Her legs spread wide to accommodate his body, but while he’d denuded his frame, she remained dressed. Their hands met at the closing to her pants, their impatient battle to remove them more of a fumbling parody. When he finally managed to strip them from her, he was ready to sink himself into her. He retained enough wits though to realize she required preparation for his penetration. With sex bots, that never proved a concern as they arrived to service pre-lubed. Human females however, according to his studies, required stimulation to achieve the same state. He slid a hand between her thighs and, to his relief, found her already soaking wet. It pleased him, on a level he did not understand, that Chloe achieved this state around him without means of manipulation.
He wasted no more time. He propped himself above her and thrust into her sex. Oh, the exquisite, unexplainable feel of her channel clamping tightly around his cock. He would never tire of it. Never tire of her. But did she feel the same about him? He had to know.
“Tell me who you belong to.”
Her eyes opened part way, her lids heavy with arousal. “Why do you care?”
He rammed into her hard. She gasped.
A growl left him. “Do not toy with me. You are my female. Not Seth’s. Not anyone else’s. Say you belong to me.” He almost roared the words, desperate to hear her say it.
For a moment defiance flashed in her gaze. “And if I don’t?”

One lucky commenter will be randomly chosen to win a digital copy of C791 Cyborgs: More Than Machines.  Good luck to all!!