Guest LW Herndon author of The Mark of Kane

Mythic or Messed Up

Whether you’re reading romance, thrillers, action adventure or urban fantasy, the most memorable stories are built on a solid basis of universal myth and archetypes. Yes, even for non-fantasy based stories. I’m not going to spiral into a deep discussion of literature and myth. I promise. My point here is to shed light on a layer that writers use in their stories.

I will offer an example of a common mythos: the orphaned boy left to fend for himself, who struggles through his growth to ultimately handle the burden of protecting his people. Raise your hand if you thought of Harry Potter. Fair. In keeping with Harry stories, this same undercurrent fits for Harry Dresden in the Dresden Files as well. The tales of King Arthur would also fit.

Now raise your hand if you thought of JR Ward’s first book in the Black Dagger Brotherhood series and the character Wrath. Did that catch you off guard? Yes, the most successful romance books also layer myth and archetype, regardless of the subgenre.

Some more examples: Star Wars story, A New Hope, introduced Luke and Leia. Their struggle is classic, a mirror image of their parents’ struggle except Luke and Leia succeed where their parents fail. Most religious tales implement this as well, since mythos carries a lesson.

Yes, we enjoy these characters because they come alive. A major reason that certain characters resonate with us, regardless of the genre, is because they strike a common cord. Even if we don’t realize while we are reading how the character fits in a timeless model, it is still familiar to our subconscious. We don’t need to know what author intended. Actually, it’s better if we don’t and can just ride the flow of the story. But as a reader, it is very obvious when an author tries and fails. The typical reason for a story not meeting our needs is that it doesn’t address a portion of the mythos for the main character, a lesson, an outcome we subconsciously expect to see and don’t. This isn’t about an ‘expected’ story conclusion because mythos can provide either failure or success with many twists and turns. The lack of resonance has more to do with a missing element to the journey.

I could map this approach to popular detective and suspense stories just as easily since that genre is prime for mythic struggles. Law-abiding characters, defenders of justice, are by definition perceived as heroic. The interesting characters in these stories have either encountered crippling failure and are working toward redemption or have lost a significant member in their life to failure or challenge. The use of universal mythos works across all genres of fiction.

Please understand that I’m not talking about cloning stories. There are enough twists and turns, not to mention nuances for an author’s voice and style, to deliver each story as unique and distinctive even if the underlying theme and myth is the same. A hero lost, found, turned, betrayed, striving to right a wrong, caught between two worlds… the options for hero transformation can continue indefinitely. And by hero, I mean character. Heroes aren’t restricted to one gender.

For those who are interested in more background on universal myths you might want to check out the DVD of Bill Moyer’s interview with Joseph Campbell. There are wonderful myths from around the world in these DVDs. Campbell, in my opinion, is the best source for information on the monomyth or universal repeating mythos through the ages. He is well known for his book, The Hero with a Thousand Faces, and his writings have been the inspiration for writers, film makers, and teachers such as George Lucas and Christopher Vogler.

Do I succeed in adding layers of universal mythos into my Thaddeus Kane stories? Not for me to say. But it is part of my process. It is also a conscious part of the creation process for other authors who I enjoy reading and rereading.

Of your favorite authors, what themes and universal mythos can you identify. What series and characters remain in your memory for years and have the most impact?

For the giveaway: A $25 Amazon or Barnes & Noble GC to one randomly drawn commenter during the tour as well as to the host with the most comments. Additionally, two random drawn winners will receive the 2nd Thaddeus Kane ebook, on its release date, Fall 2012. 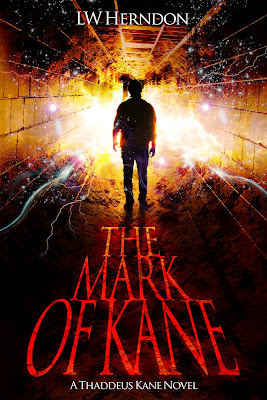 My name is Thaddeus Kane. I exist in Los Angeles, the city known for the hustle of Hollywood, an average 266 days a year of sunshine, and smog.
That’s not my L.A. I operate under the mantle of the city as a troubleshooter for the demon clan who saved my life. Not a bad job if I can stay alive, but I have my limits. I refuse to risk innocents, which causes me problems. That one line I won’t cross for anyone. Loyalties—I have them. I’m pretty sure none of my associates would approve of my particular choices.


Human sorcerers are murdering my clan to harness superpowers and I’m the only one capable of finding the evil. A tough assignment, made harder by my secret alliance with a rival demoness to save prophetic teenagers from the same horrible fate. I’m all they’ve got.

Readers can follow the dates and locations for the Mark of Kane Sizzling PR Book Tour @ http://sizzlingpr.com/2012/04/02/the-mark-of-kane-by-lw-herndon/
Posted by Unknown at 12:05 AM