Still Hot for You Promo

Still Hot for You 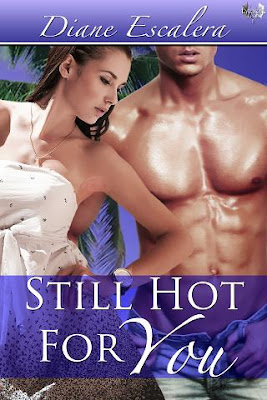 Want to get your man talking? Give him booty!Desperate times call for desperate measures. And Shay LaCosta is pretty desperate. She's wrecked her blissful marriage of five years by demanding she and her husband Dylan have a baby. What the hell was she thinking? She knows she was wrong and she’s ready to set things right, if only Dylan will let her. Bet he can’t shun her Booty Camp offer: delicious, white-hot sex in exchange for what’s going on inside his brain.Dylan may be macho and stubborn, but he really does miss his wife. A little of Shay's pushing gets him past their estrangement and into her web of seduction. She seems to have an erotic week mapped out to perfection, and who is he to complain? Their marriage is meant to be, so they'll fight with each other, and they'll fight for each other.WARNING: Racy Language, Hot Sex, Seduction

Shay’s heart rate kicked up a notch when Dylan entered her space. She looked at her husband. Poor guy. Worry filled those pretty blue eyes that five years later, still melted her on contact. He looked beat. But gorgeous.

Propped against the doorframe, he watched her suspiciously. His gaze lingered on her snug denim cut-offs. Slowly, his focus trailed up to her white, spaghetti-strap cami that did nothing to hide her erect tan nipples.

Shay held her breath. She titled her head to the side, and her smooth dark hair cascaded in lush waves over her shoulder.

Most days, she had already gone to bed when he got home from work. They rarely saw each other, let alone when Shay was dressed like that. “Hungry?”

She stepped into the light so he could see every inch of her sweet curves. Her husband flinched and she knew she’d gotten to him. Good. Because this was what he’d been missing.

Dylan dropped his work stuff on the kitchen stool. He looked at her, his gaze sweeping her up and down again. “You cooked?”

“Uh-huh.” She took in his handsome face. Did he still love her? “Shocking, huh?”

He nodded. “About as shocking as…” His chin pointed at her transparent top. “What is this? The calm before the storm?” His jaw tightened. He looked like he was waiting for a bomb to drop.

“It’s just shorts and a tank,” she said, shrugging it off. Underneath, her body felt tingly and nervous. Hopefully, she wasn’t making a fool of herself. What if he rejected her? Whatever. She had to give it a shot. “I’m just about done here. Why don’t you go change while I finish up?”

He stared straight ahead. “Okay.”

She watched him stroll away, his gait strong, fit and purposeful. She didn’t want to be angry with Dylan anymore. After months of mulish behavior, she’d rationalized her situation. At twenty-nine, she had plenty of time to start a family. It’s not like Dylan didn’t want kids. He did. He just had this need to secure their future first. The man showed tenacity, but didn’t she love that about him?

While he changed, Shay spread out the meal. She used the good china and lit a line of candles down the center of the table. Dimming the overhead lamp instantly transformed the mood to soft and relaxing. Barefoot, she sauntered over to the stereo and clicked on the CD player, already loaded with atmosphere music. She chose something not too romantic, just a light, melodic tune.

Back at the table, she tinkered with the wineglasses. She straightened a fork, aligned the salad dressing.

“Whoa,” Dylan said from the hallway.

She looked over her shoulder and smiled. Dropping into a tall, cushioned chair, she kept her eyes on him as he strode her way.

Faded jeans hung low on his waist. A white athletic undershirt smothered his hard upper body. Wide arms pressed against a V-shaped torso. Bright eyes contrasted with spiky dark hair. At thirty-two, Dylan was pure hotness. “Going all out tonight?” He checked out the glamorous display.

“Yep.” Her eyes raked over the tribal armband tattoo inked into his upper left arm. God, it was sexy. God, he was sexy. Almost as sexy as the first time she’d seen him in her father’s living room. He’d come with his own dad, a carpenter who’d been hired to work around her parents’ estate. It’d been an instant, mutual, heated attraction. Tall, dark and proud, he’d made a tool belt look like a sex toy. Blue eyes and a sinister grin--she had fallen hard.

Born and raised in the Bronx, NY, Diane Escalera makes her home in sunny South Florida.  The sultry paradise is a steady source of inspiration for her hot love stories.  Diane is married, has two children and a super cute dachshund she can’t get enough of.  She writes contemporary romance, and is published with Kensington Publishing and Lyrical Press.

To find Diane on the web: