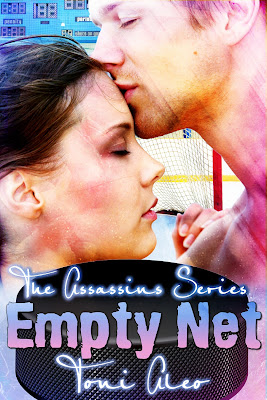 Definition of an Empty Net: When a team pulls the goalie for an extra attacker, desperately seeking a goal.


Audrey Parker was in a horrible place.


She hated her job, her sister was getting married and moving out, but worst of all, she was in love with a total jerk. No matter what she did, every guy she met hurt her. All she wanted was her happily ever after. Her Prince Charming. Her Lucas Brooks! She didn’t know how to change her life but she knew she needed too.
Feeling like she was about to hit rock bottom, Audrey wakes up next to Tate Odder.
Tate Odder had lost everything.
After being brought up from the Assassins’ farm team, the Florida Rays to the Nashville Assassins, Tate hopes he’ll forget everything he has lost. He doesn’t. Each day gets harder to live in a place he doesn’t know. Even being the first rookie goalie to shut out an opposing team three times during the Lord Stanly Cup Finals, he still felt empty. With the loss of his parents and sister still heavy on his heart, Tate isn’t sure how to live like everything is okay.
But when he wakes up beside Audrey Parker, things start to change. She turns his life upside down with her kooky sense of humor and her bright clothing. She is intelligent and beautiful, and for once, he doesn’t feel empty.
Will Audrey be the person to fill the holes in Tate’s heart, making him whole again?
Or will another player ruin everything, leaving him feeling forever like an empty net?


Excerpt
“I have to tell you,” she said with a shy grin, “It’s usually not this easy.”
He looked down at her questionably, “Easy how?”
“This easy to pick me up. I usually make guys work for it.”
He grinned and her smiled grew more, “So you want me too?”
She eyed him, her face bright with excitement. He may have been a little too forward but he was a blunt person, and hardly ever hid his feelings from anyone.
She moved closer, her eyes bright with lust as she said, “I do and I don’t even know you’re name.”
“Do you want to know it?” he asked with a cocky grin.
She moved in close, her wide brown eyes locked with his, “All I want to know is when you can leave? I have a room not even a mile from here.”


Author Bio
I am a wife, mother, and hopeless romantic.

I have been told I have anger issues, but I think it’s cause of my intense love for hockey!
I am the biggest Shea Weber fan ever, and can be found during hockey season with my nose pressed against the Bridgestone Arena’s glass, watching my Nashville Predators play!
When my nose isn’t pressed against the glass, I enjoy going to my husband and son’s hockey games, my daughters dance competition, hanging with my best friends, taking pictures, and reading the latest romance novel.
I love things that sparkle, I love the color pink, and did I mention I love hockey?


Links to Buy Will Be Available Upon Release