Waking Up In the Wrong Bed by Natalie Anderson 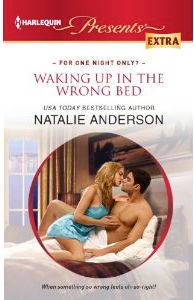 Waking Up in the Wrong Bed

When film location scout Ellie Summers sneaks into a colleague's hotel room with seduction in mind, she's thrilled by her own daring!

But the smug morning-after glow morphs into red-faced mortification when she wakes in the arms of a total stranger! Ruben Theroux might be fine with the situation, but a flustered Ellie most definitely is not.

Ellie's only defence against this very attractive guy is to insist they're friends only--strictly no benefits! But Ruben isn't a successful businessman for nothing--they'll be good together, and he's happy to play dirty to get what he wants....

[In this scene, it’s the morning after and Nathan is dealing with a very lovely woman who’s made one massive mistake…]

“You’re not Nathan.” Strangled sound emerged as she stated the obvious.
“No,” he answered calmly, not moving a muscle so as not to freak her more. But who the hell was Nathan and how she could have made such a mistake?
“How can you not be Nathan?” she gasped.
Yeah, his thoughts exactly. “Well,” he stated it quietly. “This isn’t Nathan’s room. This is my room.” Literally. Every room in the place was his.
Her mouth opened and closed a couple of times. He waited – motionless – to see how this was going to go. She didn’t seem to realise her thighs were sandwiching his hand in a hot, smooth vice and he wasn’t going to make any sudden kind of movement. But the memory of those limbs straddling his hips wasn’t helping him recover his equilibrium. All he could feel were those lush, strong curves. He wanted the rest of him to be in the midst of them again.
She flicked a wild glance around the room and then arrowed all her attention right back at him. “But this has to be his room, I counted the doors. The other one was empty.”
He pressed his lips together to stop the chuckle sliding out because he didn’t want to make the situation worse for her.
“Are you sure you’re in the right room?” she asked, her eyes still shocked wide.
“Positive. I got in late last night,” He’d been so tired it had all he’d been able to do to stumble from the shower straight to what was definitely his bed. “I came to bed and then the best dream ever turned out to be real.”
Only his dream-turned-real lover was now turning fifty shades of red – embarrassment staining her skin in a swift sweep. Her murmurs of pleasure came back to him – her rough claim that she hadn’t known it would be so good. Yeah. The sweetheart had made a mistake. She’d meant that passion for some other guy. A sharp claw of jealousy swiped his ribs, puncturing his enjoyment of his best ever wake-up. But hadn’t been some other guy who’d pleased her so much. It had been him.
“You’re a guest here?” she asked in a low choked voice.
“Actually I –”
She never gave him the chance to introduce himself, instead she launched into a monologue of mortification and panic. “Oh I can’t believe this. I can’t believe it. I’m so sorry. I am so, so sorry.”
Partly because he wanted to see her reaction, but mainly because he couldn’t resist, he let his fingers stroke – just the once, so very gently in the hot, damp prison she gripped them in.
The incessant apologies ended instantly on a breathless gasp. Her mouth reddened, her muscles tightened and her temperature sizzled. His eyes locked on hers, watching the blue go brilliant, then her black pupils absorbed that colour as they swelled super fast. Her flush deepened. He felt the spasms before she twisted, releasing him as she scuttled to the far edge of the bed.
“You don’t need to apologise,” he said, wondering if he should be the one saying sorry now. But he couldn’t quite regret it. She’d been waking up so wonderfully willing in his arms when she thought he was this Nathan, but just then? That had been a raw response to him. She was hot and hungry for him. As she’d been last night when he’d been the one to meet her demands.
A swift glance told him what he needed to know – there were no rings between those white knuckles. No guy had staked a permanent claim and the Nathan guy was a fool for not taking her to bed sooner. The woman was passionate and hungry, literally a dream lover.
He coughed to ease the constriction in his chest. “I’m sorry I’m not Nathan.”
Only because he wanted what she’d meant for the other guy – that invitation and pleasure. Hell, he wanted it now. He was stiffer than a steel pipe and feeling her sensual response spike like that had worsened it. But he fought the impulse to drag her close again, wincing at his new-found Neanderthal leanings.
The poor woman was completely mortified and he was all rampaging lust, desperate to sleep with her again. What kind of human was he?

Great afternoon read! Ellie and Ruben's story is so cute, I found myself laughing and rooting for their relationship to make it from the very beginning. The well written characters have a good sense of humor that makes the book all that more interesting. I really enjoyed this wonderfully well written "will they won't they" romance and will be reading more of Ms. Anderson's work. EBook provided by the author for review.

AMAZON    Waking Up in the Wrong Bed

BARNES & NOBLE  Waking up in the Wrong Bed

BOOK DEPOSITORY  Waking Up in the Wrong Bed

USA TODAY bestseller Natalie Anderson writes fun, frisky, feels-good contemporary romance for Harlequin Mills & Boon and Entangled. With over twenty books published, she’s also been a Romantic Times Award nominee & a finalist for the R*BY (Romantic Book of the Year). She lives in Christchurch, New Zealand with her husband, four children and what feels like a million ducks. Find out more at her website http://www.natalie-anderson.com  and be sure to sign up for her newsletter there as she often has subscriber only eTreats!
Posted by DeborahR at 12:05 AM