How do you spell disaster? For former army captain Boone Toliver, it's his sister's wedding to a man she hardly knows, and he'll die before he lets that happen. Boone has five days to get from Montana to Florida with an injured leg. And his only option is hitching a ride with his free-spirited neighbor, hairstylist Tara Duvall--whose body makes his mouth water and his libido burn.With each passing mile, the magnetic pull between them grows stronger, and Boone's trademark control is slipping away. But when his sex drive takes the wheel, will he be able to stop the wedding in time?

Well written with a great storyline!  I loved watching the chemistry develop between these two opposites. Tara's perky personality is a perfect complement to Boone's moodiness.
The story was at times dramatic and at times hilarious. Who knew there were so many things that could go wrong on a road trip! It was intriguing to witness the sexual chemistry between these two as they developed a real relationship.
Next read: Smooth Sailing, Book two in the Stop the Wedding series.
Book supplied by the author for an honest and fair review. 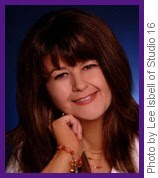 Lori Wilde can’t remember a time when she didn’t want to write. She even went to nursing school so she could have a schedule flexible enough to allow her to write on the side. She nursed for 20 years, working in a variety of settings from the newborn nursery to the recovery room, to dialysis. But she never lost her desire to write.She sold her first book in 1994 to Silhouette Romance but later discovered she had a flair for comedy and branched out to Harlequin Duets and now, to Blaze.Lori is an adventuresome soul who loves to travel. She’s taken flying lessons, completed two marathons, rode in a hot-air balloon, performed with a professional jazz band, traveled Europe as a teenager, hiked volcanoes in Hawaii, trod on glaciers in Alaska, shot white-water rapids, water-skied, snow-skied, raced all-terrain vehicles, bodysurfed in the Gulf of Mexico, and photographed grizzly bears in Yellowstone.She lives in her native Texas, with her own real-life hero, Bill, her red heeler/Australian shepherd dog, Cinnamon, and four ducks, Quacker, Big Guy, Affleck, and Sheepidy.